Do not forget ! Falea, successful resistance against the first uranium mine in Mali, in preparation for future projects. 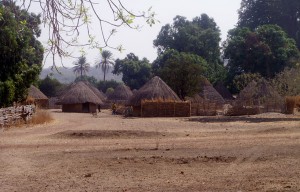 1) Preface : But who is Cheikh Anta DIOP

The Senegalese historian and anthropologist Cheikh Anta DIOP carried out fundamental research work on the African origin of Egyptian culture and consequentially also of European civilization . His first PhD thesis was refused by the Sorbonne in 1954 (1) . His second thesis ‘Cultural Unity of Black Africa’ received the same treatment in 1959, the year the Federation of Mali was created prior to her Independence on June 20th 1960. The very perseverant Cheikh Anta DIOP who was ‘inhabited by the necessity of restoring to Africa her original authenticity’, finally succeeded in obtaining the recognition of his work by the Sorbonne that same year. The 20th of August 1960, Senegal, under pressure fromFrance and the General De Gaule, withdrew from the young Federation of Mali and proclaimed her own independence. Cheikh Anta DIOP returned to Dakar in 1961 and prepared to teach at the Faculty of Letters of his home country. Faced with the refusal of the Senegalese authorities at the time, under the direction of the President and poet Leopold Sédar Senghor, he founded in 1963 the Fundamental Research Institute of Black Africa( IFAN)  (2)which included, amongst others, a laboratory for carbon dating. As member of the international scientific committee for general history of Africa at UNESCO, he participated at Cairo in 1974 in an international symposium which came to a fundamental consensus on one of Cheikh Anta DIOP’s theses : Egyptian culture stems from, at the out start and is preceded by precursory African cultures. It was only in 1981 that he was appointed professor at the Faculty of Letters for the History of Antiquity. Dakar University was rebaptised in posthumous recognition of his valuable work , University Cheikh Anta DIOP !

2) A University Antenna at Falea ?

Professor Many CAMARA, surrounded by his students and friends, is an anthropologist and a sociologist, a wise man, a scientist, a researcher, a strategist and a tireless re-assembler on the basic values of clarity and coherence, the adequation of the collective needs and progressive objectives of our societies, but also the challenges of our times. He was born in Falea. Without him, the struggle against the first Malian uranium mine at Falea would have been a failure. But, thanks to him, his village, his surroundings and the movement of international solidarity that he managed to trigger, the uranium companies’ monstrous machines of destruction are gone. Unfortunately those preparing other mining extractions directly menacing to the inhabitants are still around… The professor has a dream ? A university antenna at Faléa. Hundreds of university academics and technicians from northern economies are scrutinizing the mining extraction activities in Africa. Rare are those who have heard of Cheikh Anta DIOP. They totally ignore authentic Africa as they participate « thoughtlessly » in the race for raw materials, their approach methods exclude consultation with the inhabitants and they trample underfoot the immense cultural riches and precious values of this African civilization from which Humanity could so much benefit during the present existential crisis. 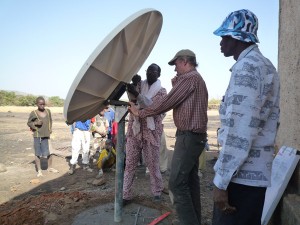 2011 : Act one : setting up a communications unit, satellite antenna, telephone and Internet access to open up communication at Falea village.

The West, actor of « limitless free-exchange », implying the weakening of the State and without minimal environmental and work regulations, is confronting the billions, accumulated and invested by China who is seeking, preferably, strong government. Other investors such as Saudi Arabia and the Emirates, overflowing with petro-dollars, are toeing the line alongside djihadist mercenaries and, via costly propaganda and interference propagate fascistic islamism (Wahhabite). Thus the raw matter race has become a very dangerous escalation leading over these past months towards ever increasing military interventions. But Professor Many CAMARA’s project is an initiative full of wisdom : right at the heart of a mining zone, but ,thanks to the support of many universities, institutions and individuals, students coming from many origins are able to discover, within the frame of their studies – during a training period at Faléa and the surrounding area – the culture, the history, the living conditions, nature’s potential, the fauna and the flora and above all also the people, the men, women and children who wish to go on living in peace according to the principles and values of universal humanism, whilst keeping control of their destiny. Who can contribute concretely to make this prof’s dream come true ?

The European Parliamentarians Michèle RIVASI, Eva JOLY, the Mayor of Falea and his welcome delegation 2011

3) Brief summary of the situation in Mali

1) thecountry,occupiedbymilitaryforces,isunderpolitical control, supervised from the institutional and administrative point of view by occidental forces, of which France, Mali’s former colonial metropolis, is first in line ; 2)an institutional and administrative reform has just been imposed on Mali by the latest Algiers « peace » agreement, which lays down the basis for the dismantling of Mali into many autonomous regions doted with legislative and executive powers that are totally independent of the central State (a federalism in disguise) ; 3)Under these conditions, Mali’s total loss of sovereignty on her own national territory, leaves the door open to the frantic grabbing of all natural, mining and energetic resources and also the accelerated plundering and complete destruction of the local territory and patrimony. The peace agreement violates the Malian Constitution. Regionalisation allows France, who « received » the command of the UN troops (MINUSMA), to restart the MNLA – the national movement for the liberation of the Azawad, a french creation in the North of Mali (Kidal). What is more, after France’s unilateral intervention (outside the UN resolution) and on the background of strong protestation by democratic forces within the country during « Operation Serval » in 2013, France concluded in 2014 a defense agreement with Mali over a five year period within the framework of « Operation Barkane » extending over the principal countries of the Sahel-Sahara stretch (Mauritania, Mali, Niger, Tchad and Burkina Faso) to control and « securize », from military bases, the areas of this region that are rich in natural resources. 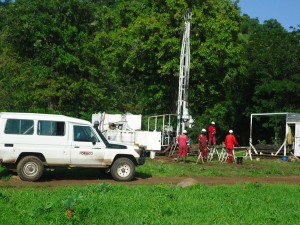 Falea: The uranium exploration drills are gone, but many other societies are still looking for other raw materials.

4) The citizen initiative of Falea has now important cooperation partners

26th of October 2015 : again and again, the municipal election at Falea has been delayed. ASFA21, the technical and scientific operator of ARACF (Association of inhabitants and friends of the Falea Commune) managed to negotiate in July 2015, a partnership agreement with the German Cooperation (GIZ) in Mali. The title of the project, which will be put into practice within the frame of this agreement is: « Project of Support for a transparent, consensual, fair and peaceful management of the resources, mining, agricultural and natural of the communal territory of Faléa (PAGREM/Faléa) « HELVETAS is also engaged in the local democratic governance of the Circle of Kéniéba within the framework of a three year support programme sustained by Swedish and Norwegian development cooperation’s . ASFA21 is cooperating with a Chinese program aimed at setting up a Bamboo production line at Faléa. The program has begun with a first stage to evaluate the potential within the Kéniéba Circle which is presently underway. Bamboo production will include the complete cycle : from improvement of local bamboo production to its on-market sale going through the creation and set-up of the whole variety of all possible transformations and applications. ASFA21 also cooperates with the Rosa Luxembourg Foundation (Germany) since 2011 within the framework of their program « Reinforcing the capacities of local actors » through information, training, and organizational support. March 2016 Nouhoum KEITA, ASFA21 Hannes LAMMLER, Forum Civique Européen (1) Nations nègres et culture , Negro nations and culture (2)In this institute IFAN , the exhibition on Falea – the menace of uranium was presented for the first time in Africa, February 2011. Followed by Berlin, Geneva, Salzburg and European Parliament in Brussels 2013 .